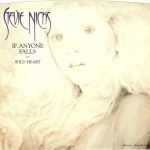 “If Anyone Falls” is a song by American singer and songwriter Stevie Nicks. It was the second single from her second solo studio album The Wild Heart (1983). The song peaked at number 14 on the US Billboard Hot 100 and reached number eight on the Billboard Mainstream Rock chart.