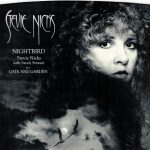 “Nightbird” is a 1983 song by the American singer/songwriter Stevie Nicks, written by Nicks with Sandy Stewart. It was the third single from her second solo album, The Wild Heart. The song peaked at No. 33 on the Billboard Hot 100 and reached No. 32 spot on the Billboard Top Rock Tracks chart. The song also reached No. 39 on the U.S. Adult Contemporary Chart. The song was written as a continuation of themes explored in “Edge of Seventeen,” namely “the difficulties of female rock ‘n’ roll singers.” In a 1983 MTV interview, Nicks said “Nightbird” was her favorite song from the new album.