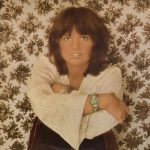 Don’t Cry Now (1973) is Linda Ronstadt’s Gold-certified fourth solo LP and the first of her studio releases for Asylum Records, following six albums recorded for and released on Capitol Records.

It was reissued on Rhino’s Flashback Records in 2009 and has never been out of print. It has sold approximately 800,000 copies in the United States alone.

The tracks on Don’t Cry Now were produced individually, some by John Boylan, who produced Ronstadt’s preceding eponymous album; some by singer/songwriter J. D. Souther; and, for the first time in what would ultimately be a long and highly successful professional relationship, by British musician Peter Asher, former member of the ’60s rock duo Peter & Gordon. Asher was the head of A&R for Apple Records prior to his move to USA.

This album contains three songs composed by Souther (Souther and Linda would become romantically involved and he would write several songs for her) one by Randy Newman, a cover of a Neil Young ballad, one originally from the Flying Burrito Brothers, and a version of the Eagles’ “Desperado,” which the band had released earlier that year.

1 I Can Almost See It

2 Love Has No Pride

9 Everybody Loves A Winner

Leave a Reply to Cheryl Milonopoulos on Facebook Cancel reply