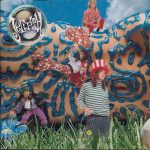 Songwriting sessions for the created many problems for the band, particularly for Manning and Sturmer. The album was recorded in Schnee Studios in north Hollywood and produced by Albhy Galuten and Jack Joseph Puig.

Despite the album being released to critical acclaim from contemporary music critics, the album failed to reach a wide audience and peaked at No. 124 on the Billboard 200.

“Baby’s Coming Back” was covered by the British band McFly in 2007 which reached No. 1 on the UK Singles Chart. A two-disc Deluxe Version was released by Omnivore Recordings in January 2015