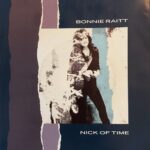 “Nick Of Time” is a song by American blues musician Bonnie Raitt. Taken as the third single from her 10th solo album of the same name (1989), the song was released in May 1990. The song debuted at number 94 and reached its peak of 92 a week later on the Hot 100 chart. It also earned a top 10 placement on the Adult Contemporary Chart.

Raitt wrote most of the song during a week-long cabin retreat in Mendocino, California, and she recorded a homemade demo on her own. The song was inspired by a culmination of observations about aging. The first verse (“A friend of mine, she cries at night…”) was taken from a conversation Raitt had with a heartbroken friend who was nearing middle age and desperately wanting a baby, and the song also featured her singing about her own parents (“I see my folks, they’re getting old…”).

The singer recalled: “In his vulnerable state I could see he was getting older and could really feel what it was like for a body to age. This whole idea of time and it being more precious as you age, I realized this would be what I’d write about.”

Nick Of Time is the tenth studio album by the American singer Bonnie Raitt, released on March 21, 1989. It was Raitt’s first album to be released by Capitol Records. A commercial breakthrough after years of personal and professional struggles, Nick of Time topped the Billboard 200 chart, selling five million copies, and won three […]