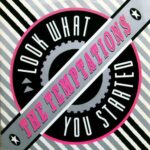 “Look What You Started” is the second single from the album Together Again from The Temptations. It peaked at #8 in the R&B Charts and #90 in the UK Charts.

Together Again is an album by the American R&B vocal group The Temptations, released on Motown Records in 1987. It is the group’s thirty-fourth studio album, and the first released under the Motown imprint. All of Motown Records’ previous Temptations releases were made on the Gordy label, which was discontinued and whose artist roster and […]