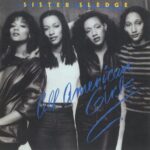 All American Girls is the fifth studio album by the American R&B vocal group Sister Sledge, released on February 2, 1981, by Cotillion Records. Unlike their previous albums, the group served as co–producers, with Kathy Sledge and Joni Sledge writing the songs.

Released in February 1981, this album was a departure from the past band style and does not feature production by Nile Rodgers or Bernard Edwards. Instead, Narada Michael Walden was the main producer of the project. Four singles were released from this album.

The first single and biggest hit from the album was “All American Girls”, written by songwriter Allee Willis along with Joni Sledge and Narada Michael Walden’s then–wife Lisa Walden. Released in January 1981, The song peaked at number three on the R&B/Soul charts and 79 on the Hot 100 charts in late–March 1981. It was also a Top 10 hit in the Low Countries, reaching number eight in The Netherlands and number six in Belgium. It also charted in Germany (#27)and the UK (#41).

The follow–up single was “Next Time You’ll Know” which was released in April 1981. The single peaked at number 82 on the Hot 100 charts by mid–May 1981. In August 1981, the third single “If You Really Want Me” written by the youngest member Kathy Sledge was released and “He’s Just a Runaway” in late 1981.

6 Ooh, You Caught My Heart