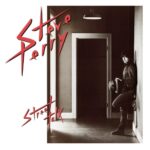 Street Talk contains Perry’s biggest hit as a solo artist, “Oh Sherrie”, written for his then-girlfriend Sherrie Swafford. The song hit #3 on the Billboard Hot 100 and #1 on Billboard’s Rock chart, and the accompanying music video (also featuring Swafford) was a hit on MTV. Other singles included “Foolish Heart” (peaked at #18), “She’s Mine” (peaked at #21), and “Strung Out” (peaked at #40).

There were a number of nods to Perry’s pre-Journey band Alien Project on this album—in fact, that band was originally going to be called Street Talk. In the liner notes, Perry dedicates the album to Richard Michaels (the bassist for Alien Project). Also, drummer Craig Krampf was a member of Alien Project later in the 1970s.

In addition to launching Perry’s solo career, the cover photo for Street Talk served as a career launchpad for music photographer John Scarpati, who met Perry during the album’s recording sessions at a studio in Sherman Oaks. Street Talk is certified as 2× Platinum (2,000,000) in sales by the RIAA.

7 You Should Be Happy

9 Captured By The Moment