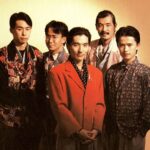 T-Square (formerly known as The Square), stylized in all-uppercase T-SQUARE, is a Japanese jazz fusion band formed in 1976. They became famous in the late 1970s and early 1980s along with other Japanese jazz bands. They are known for songs such as “Truth”, “Japanese Soul Brothers”, “Takarajima”, “Omens of Love”, among others.

During the first years simply The SQUARE was printed on the frontsides of their albums. After the renaming of the band to T-Square the imprint changed to T-SQUARE (all in Capital letters) and their typical logo became a capital letter T printed over a red square. During the years with the changing names of the band the logo got modified several times, reflecting the changing band names such as T-Square alpha (where an α sign got added to the logo), T-Square plus where the text “plus” was added centered next to the T in smaller letters.