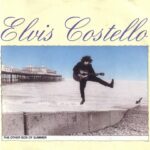 “The Other Side Of Summer” is a single from Elvis Costello‘s 1991 album Mighty Like A Rose, written by Costello. The song was co-produced by Costello, Mitchell Froom and Kevin Killen. A Beach Boys pastiche, the song featured a Wall of Sound production. The single reached number 43 in the UK Singles Chart and charted in Canada and Australia. It also reached number 1 on the US Modern Rock Tracks chart and number 40 on the Album Rock Tracks chart.

Mighty Like A Rose is the 13th studio album by the British rock singer and songwriter Elvis Costello, released in 1991 on compact disc as Warner Brothers 26575. The title is presumably a reference to the pop standard “Mighty Lak’ a Rose”, and although that song does not appear on the album, the words of its first stanza are […]