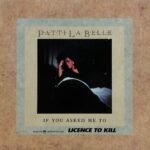 “If You Asked Me To” is a song written by American songwriter Diane Warren. It was originally recorded by American singer Patti LaBelle for her ninth studio album Be Yourself (1989), and also for the soundtrack to the James Bond film, Licence to Kill. The lyrics are from the point of view of a woman who pleads to her significant other: “If you asked me to, I just might change my mind, and let you in my life forever”. Three years later, Canadian singer Celine Dion covered the song for her 1992 self-titled second English-language studio album. Released as the album’s second single, Dion’s version topped the Canadian charts and peaked at number four on the US Billboard Hot 100.

“If You Asked Me To” was first featured on the soundtrack of the 1989 James Bond movie, Licence to Kill. The song’s title refers to dialogue from the film. LaBelle’s version peaked at number 79 on the US Billboard Hot 100, at number 10 on the Hot R&B/Hip-Hop Songs, and at number 11 on the Hot Adult Contemporary Tracks. The song appeared on the daytime soap opera General Hospital in 1989.

Be Yourself is the ninth solo album by American singer Patti LaBelle, released in 1989 on the MCA label, her second album with the company following 1986’s platinum hit, Winner in You. The album features the single, “If You Asked Me To” (a US R&B top 10 single by LaBelle, later covered by Celine Dion), […]