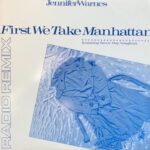 “First We Take Manhattan” is a song written by Canadian singer-songwriter Leonard Cohen. It was originally recorded by American singer Jennifer Warnes on her 1986 Cohen tribute album Famous Blue Raincoat, which consisted entirely of songs written or co-written by Cohen.

Warnes’ original recording is notable for the distinctive driving lead guitar played by Stevie Ray Vaughan. Producer Roscoe Beck was from Austin, Texas and friends with Vaughan. In late February 1986, at the annual Grammy Awards in Los Angeles, Beck asked Vaughan to record the guitar for the song. In a 2007 interview, Beck recalls that Vaughan did not have his guitar or amp with him, and used one of Beck’s old Strats instead. After working on a few technical problems, the finished recording was achieved after two or three takes. According to Jennifer Warnes’ official site, Vaughan finished recording his takes at 4:00 a.m.

Famous Blue Raincoat: The Songs of Leonard Cohen is the sixth studio album recorded by the American singer Jennifer Warnes. It debuted on the Billboard 200 on February 14, 1987 and peaked at No. 72 in the US Billboard chart and No.33 in the UK albums chart. Originally released by Cypress Records (RCA Records in […]

END_OF_DOCUMENT_TOKEN_TO_BE_REPLACED

Evelyn ”Champagne” King 1979 Reba Rambo – The Prodigal According To Reba