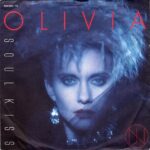 “Soul Kiss” is a song recorded by English-born Australian singer Olivia Newton-John for her twelfth studio album, Soul Kiss (1985). It was released as the lead single from the album on 25 September 1985 by MCA Records. The song was produced by John Farrar and written by Mark Goldenberg.

Soul Kiss is the thirteenth studio album by Australian pop, adult contemporary singer, Olivia Newton-John, which was released in October 1985. It made No. 11 on the Australian Kent Music Report Albums Chart and the Top 30 on the United States Billboard 200. The album was produced by long-time associate, John Farrar, who also co-wrote […]