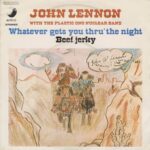 “Whatever Gets You Thru The Night” is a song written by John Lennon, released as a single in 1974 on Apple Records, catalogue number Apple 1874 in the United States and Apple R5998 in the United Kingdom. It peaked at No. 1 on all three record charts, Billboard Hot 100, Cashbox and Record World Top 100, and at No. 36 in the British singles chart. It was the lead single for Lennon’s album Walls and Bridges; in the UK the single was released on the same day as the album. “Whatever Gets You thru the Night” was Lennon’s only solo No. 1 single in the United States during his lifetime, and Lennon was the last member of the Beatles to achieve this level of success. In Canada, the single spent two weeks at No. 2, and became the 30th biggest hit of 1974.

Walls And Bridges is the fifth studio album by English musician John Lennon. It was issued by Apple Records on 26 September 1974 in the United States and on 4 October in the United Kingdom. Written, recorded and released during his 18-month separation from Yoko Ono, the album captured Lennon in the midst of his […]