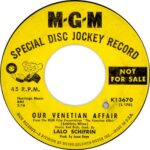 The Venetian Affair is a 1967 spy film directed by Jerry Thorpe and starring Robert Vaughn and Elke Sommer. It is based on a novel of the same name by Helen MacInnes.

The soundtrack was written by Lalo Schifrin. No soundtrack album was ever issued, the tracks only available on this single.