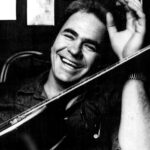 Hoyt Wayne Axton (March 25, 1938 – October 26, 1999) was an American singer-songwriter, guitarist, and actor. He became prominent in the early 1960s, establishing himself on the West Coast as a folk singer with an earthy style and powerful voice. Among his best-known songs are “Joy to the World”, “The Pusher”, “No No Song”, “Greenback Dollar”, “Della and the Dealer”, and “Never Been to Spain”.

He was also a prolific character actor, appearing in dozens of film and television roles over several decades, memorably as a father figure in a number of films, including The Black Stallion (1979) and Gremlins (1984). (More)