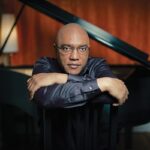 While still a teen, Childs was playing professionally and he made his recording debut in 1977 with the J. J. Johnson Quintet during a tour of Japan, documented as “the Yokohama Concert”. He gained significant attention during the six years (1978–84) he spent in trumpeter Freddie Hubbard’s group. His early influences as a pianist included Herbie Hancock, Keith Emerson, and Chick Corea and as a composer, Paul Hindemith, Maurice Ravel and Igor Stravinsky. Childs nevertheless had an original conception of his own from near the start, developing his own voice as both a pianist and a composer in jazz and classical music genres. His sister is the playwright Kirsten Childs. (More)