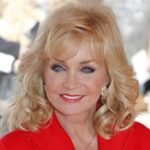 Barbara Ann Mandrell (born December 25, 1948) is an American country music singer and musician. She is also credited as an actress and author. During the late 1970s and early 1980s, she was considered among country’s most successful music artists. She had six number one singles and 25 top ten singles reach the Billboard country songs chart. She also hosted her own prime–time television show in the early 1980s that featured music, dance numbers and comedy sketches. Mandrell also played a variety of musical instruments during her career that helped earn her a series of major–industry awards.

Mandrell was born in Texas and raised mostly in California. Raised by a musical family, she played an assortment of instruments by the time she reached her teenage years. Her skills on the steel guitar were noticed by country music entertainers, who gave Mandrell her first performance opportunities at age 13. During this period she became a regular on the television program Town Hall Party and performed as a musician in shows featuring Johnny Cash and Patsy Cline. Her family formed a band in her late teens which traveled overseas and entertained military bases. After marrying in 1967, Mandrell nearly ended her performing but ultimately decided to pursue a singing career instead. In 1969, she signed her first recording contract as a singer with Columbia Records.

In the early 1970s, Mandrell recorded a number of singles that combined country influences with R&B–soul. Her singles made the country charts with regularity. Her most successful of this period was “Tonight My Baby’s Coming Home” (1971) and “The Midnight Oil”. In 1975, she moved to ABC–Dot records and reached her commercial breakthrough with country–pop singles like “Sleeping Single in a Double Bed” (1978), “(If Loving You Is Wrong) I Don’t Want to Be Right” (1979), “I Was Country When Country Wasn’t Cool” (1981) and “One of a Kind Pair of Fools” (1983). She became a headlining concert attraction and won several major–industry awards including the Entertainer of the Year accolade from the Country Music Association.

After a 1984 car crash, Mandrell nearly ended her career. In 1985 she returned to recording and had several more top ten country singles during the decade including “Fast Lanes and Country Roads” (1985), “No One Mends a Broken Heart Like You” (1986), and “I Wish I Could Fall in Love Today” (1988). She resumed performing, appearing live in concert and acting on television. Mandrell appeared in several television films and shows during the late 1980s and 1990s like Burning Rage and Empty Nest. She continued recording into the 1990s, releasing several albums for the Capitol label including No Nonsense (1991). In 1997, Mandrell announced her retirement from performing and recording. She continued an acting career until 2000. In 2009, she was inducted into the Country Music Hall of Fame for her work in the industry. (More)

1984 Barbara Mandrell – Christmas At Our House