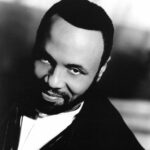 Andraé Edward Crouch (July 1, 1942 – January 8, 2015) was an American gospel singer, songwriter, arranger, record producer and pastor. Referred to as “the father of modern gospel music” by contemporary Christian and gospel music professionals, Crouch was known for his compositions “The Blood Will Never Lose Its Power”, “My Tribute (To God Be the Glory)” and “Soon and Very Soon”. He collaborated on some of his recordings with famous and popular artists such as Stevie Wonder, El DeBarge, Philip Bailey, Chaka Khan, and Sheila E., as well as the vocal group Take 6, and many popular artists covered his material, including Bob Dylan, Barbara Mandrell, Paul Simon, Elvis Presley and Little Richard. In the 1980s and 1990s, he was known as the “go-to” producer for superstars who sought a gospel choir sound in their recordings; he appeared on a number of recordings, including Michael Jackson’s “Man In the Mirror”, Madonna’s “Like a Prayer”, and “The Power”, a duet between Elton John and Little Richard. Crouch was noted for his talent of incorporating contemporary secular music styles into the gospel music he grew up with. His efforts in this area helped pave the way for early American contemporary Christian music during the 1960s and 1970s.

Crouch’s original music arrangements were heard in the films The Color Purple, for which he received an Oscar nomination, and Disney’s The Lion King, as well as the NBC television series Amen. Awards and honors received by him include seven Grammy Awards, induction into the Gospel Music Hall of Fame in 1998, and a star on the Hollywood Walk of Fame. (more)

1976 Andraé Crouch & The Disciples – This Is Another Day

1999 Andraé Crouch – The Gift Of Christmas