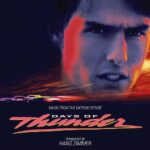 This is the first of three films to star both Cruise and Kidman (the other two being Far and Away and Eyes Wide Shut). The film received mixed reviews, with criticism aimed at its unrealistic special effects, characters, screenplay, acting, dialogue and similarities to Top Gun, but was widely praised for its action sequences, Hans Zimmer’s musical score, fast pace, and the performances of Cruise and Kidman.

The score for Days of Thunder was composed by Hans Zimmer, with Jeff Beck making a guest appearance on guitar. This was the first of an ongoing list of films in which Zimmer would compose the score for a Jerry Bruckheimer production.