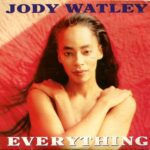 “Everything” is the third single from Jody Watley‘s second album, Larger Than Life. “Everything” was the third consecutive top-ten Pop and R&B single from that album in the U.S., peaking at #4 and #3, respectively. The single only reached #74 in the United Kingdom.

“Everything” was the follow up single after “Friends”, and became the third consecutive Top 10 hit from Watley’s Larger Than Life album. The ballad “Everything” debuted on the U.S. Billboard Hot 100 singles chart at #92 the week of October 14, 1989, and advanced to its peak position of #4 the week of January 20, 1990, where it remained for two weeks. Overall, the single spent ten weeks in the Top 20 of the chart.

Larger Than Life is the second studio album by American singer Jody Watley, released by MCA Records on March 27, 1989.