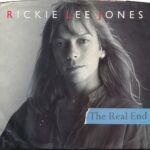 “The Real End” is a single by Rickie Lee Jones from her album The Magazine (1984) it peaked at #82 in the US Billboard Charts.

The Magazine is an album by Rickie Lee Jones, released in September 1984. It is her third full-length studio album, and was released as the follow-up to Pirates (1981). The album was partly composed in France and was co-produced by Jones and James Newton Howard. After the release of Pirates in July 1981, Jones spent […]