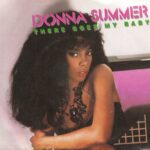 “There Goes My Baby” is a song written by Ben E. King (Benjamin Earl Nelson), Lover Patterson, George Treadwell and produced by Jerry Leiber and Mike Stoller for The Drifters.

Donna Summer‘s version of “There Goes My Baby” was issued as the first single on July 5, 1984, from her 1984 album Cats Without Claws by Geffen Records and Warner Bros. Records. Her rendition was produced by Michael Omartian. The single became a moderate hit, peaking at #21 on the US Hot 100, and in the top twenty of the US R&B chart. It also peaked #15 in Spain Radio chart.[13] Summer’s version of this song features an electro-pop sound and was accompanied by a high-quality music video featuring Summer and husband Bruce Sudano as a down-on-their-luck couple at the outbreak of World War II. The video was played in heavy rotation on the MTV network, showing MTV’s continued support of Summer as an artist. With this single, Summer earned her nineteenth – and second to last – US Top 40 hit.