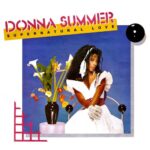 “Supernatural Love” is the second single from Donna Summer‘s 1984 Cats Without Claws album. The song released on October 23, 1984 by Geffen Records (US) and Warner Bros. Records (UK). It was written by Summer, Michael Omartian and Bruce Sudano, and produced by Omartian. The typically 1980s synthesized song was remixed for its release as a single and became a minor hit in the US. It was accompanied by a very colourful video again featuring Donna and husband Bruce Sudano as a star-crossed couple chasing each other through time when he is abducted by an evil enchantress—from the stone age into current 1980s New Wave, where Donna pursues the enchantress in order to save him.

While the single only peaked at #75 on Billboard’s Hot 100 chart, it fared better on the Billboard Hot Dance Club Play chart at #39.