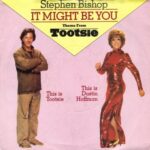 “It Might Be You” is a song with music written by Dave Grusin, and lyrics written by Alan & Marilyn Bergman. It was performed by singer/songwriter Stephen Bishop in the 1982 film Tootsie starring Dustin Hoffman and Jessica Lange. The song was nominated for an Academy Award for Best Original Song in 1983.

Bishop’s recording peaked at No. 25 on the Billboard Hot 100 chart on May 7, 1983, and spent eight weeks in the Top 40, becoming his final Top 40 song to date. It also spent two weeks at No. 1 on the U.S. adult contemporary chart in April the same year.

END_OF_DOCUMENT_TOKEN_TO_BE_REPLACED

Sleeping With Girls is the fourth album by Stephen Bishop, released in 1985. Earl Stephen Bishop (born November 14, 1951) is an American singer-songwriter, actor, and guitarist. His biggest hits include “On and On”, “It Might Be You” and “Save It for a Rainy Day”. He has appeared in and contributed musically to many motion […]