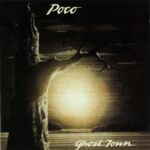 Ghost Town is the fifteenth studio album by the country rock band Poco, released September 20, 1982. The Atlantic Records label debut of Poco, Ghost Town was the final album by Poco to feature the group lineup who had played on Poco’s 1978 breakout album Legend, as the 1984 Poco album release Inamorata would not feature Charlie Harrison.

After the gold certified success of the 1978 ABC Records album release Legend, Poco’s three subsequent album releases on MCA Records – who had absorbed ABC – failed to reach that level of success. Ghost Town marked Poco’s move to Atlantic Records with no resultant comeback peaking at #195 on the album chart in Billboard magazine, well below the peak of the group’s final MCA album Cowboys & Englishmen which had been released in February 1982 to reach a chart peak of #131.

A third single release: “Break of Hearts” – cited as one of his favorite overlooked compositions by Paul Cotton who’s described the song as a follow-up to Poco’s 1979 Top 20 hit “Heart of the Night” – failed to chart. Cotton has stated that Poco had problems with Atlantic Records: Poco would record one more album for Atlantic: Inamorata released in April 1984, then take a hiatus from recording until 1989 when the RCA Records release Legacy became Poco’s second gold certified album.