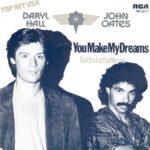 “You Make My Dreams” is a song by the American duo Hall & Oates, taken from their ninth studio album, Voices (1980). The song reached number five on the Billboard Hot 100 chart in 1981.

John Oates said the song came about “through a happy accident, my guitar player friend of mine and myself were jamming in the dressing room, and I started playing a delta blues and he started playing a Texas swing, and we put them together, and all of a sudden into my head popped “you make my dreams.” I just started singing it. I don’t know why, but I did. And it sounded really cool and everyone liked it. It was as simple as that.”

Daryl Hall also commented on the iconic piano riff that opens the song and the distinctive sound that is generated by a Yamaha CP30 in an interview with the BBC on the 40th anniversary of the song’s release. “It’s a very unusual edition of a Yamaha called the Yamaha CP30. There were very few of them made and it wasn’t out for very long. Over the years mine got destroyed (and) I cannot duplicate that sound other than with the actual instrument. So I had to search and search until, quite recently, I found one.”