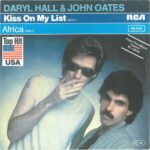 “Kiss On My List” is a song by the American duo Hall & Oates. It was written by Daryl Hall and Janna Allen, and produced by Hall and John Oates. It was the third single release from their ninth studio album, Voices (1980), and became their second US Billboard Hot 100 number-one single (after “Rich Girl” in 1977). It spent three weeks at the top spot.

The song was written with the intention of Janna Allen, sister of Hall’s longtime girlfriend Sara Allen, singing it, as she was interested in starting a music career. Hall cut a demo version as a guide for her, but later when his manager found the tape lying around the studio, he insisted that Hall and Oates cut the song themselves. In fact, the production team liked the demo so much that they did not do a second take, instead adding background vocals and instrumentation to the demo and mixing them together. Hall recalled that is why the drums sounded so “dinky” – the “drums” in fact being the early Roland CR-78 drum machine mixed in with a live drumming overdub.

Hall calls it an anti-love song, with the song title being tongue-in-cheek sarcasm in that the kiss is not that important, in that it is on a list of other things that are just as important. The music video was the 207th that aired on MTV’s first day of broadcast.