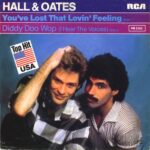 “You’ve Lost That Lovin’ Feeling” is a song by Phil Spector, Barry Mann and Cynthia Weil, first recorded in 1964 by the American vocal duo the Righteous Brothers.

In 1980, the American musical duo Hall & Oates recorded a cover version of “You’ve Lost That Lovin’ Feelin'” for their ninth studio album Voices. Their version of the song was produced by the duo and included a sparse arrangement contrasting with the lavish Righteous Brothers original version. It was the second non-original song Hall & Oates had ever recorded. According to Oates, this was the last song recorded for the album, as it had been deemed complete with the other ten tracks. However, Hall and Oates felt that there was “something missing” from the album. Then they came across the Righteous Brothers’ version of the song on a jukebox machine while going out to get food and they decided to cover it. They went back to the studio, cut it in a period of four hours, and placed on the album. The track was issued on RCA Records as the album’s second single after the original “How Does It Feel to Be Back” peaked at No. 30 on the Billboard Hot 100. The November peak of No. 12 on the Hot 100 chart made “You’ve Lost That Lovin’ Feelin'” the first Hall & Oates single to ascend higher than No. 18 since the number one hit “Rich Girl” in the spring of 1977. “You’ve Lost That Lovin’ Feelin'” also reached No. 15 on the Billboard Adult Contemporary chart, on the Radio & Records Airplay chart the song debuted at No. 30 on the September 26, 1980 issue, after seven weeks it reached and peaked at No. 4 staying there for one week, the song stayed on the top 10 of the chart for six weeks and remained on it for thirteen. It also reached No. 55 in the UK Singles Chart.