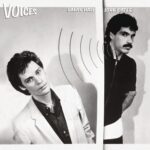 Voices is the ninth studio album by American pop music duo Daryl Hall & John Oates. The album was released on July 29, 1980, by RCA Records. It spent 100 weeks on the Billboard 200, peaking at number 17.

Voices was the first album that Hall & Oates produced by themselves, working in conjunction with renowned engineer Neil Kernon.

9 Everytime You Go Away