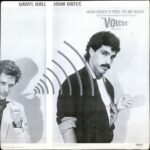 “How Does It Feel To Be Back” is the first single from the Hall & Oates album Voices, released in 1980. It reached number 30 in the US Billboard Charts.