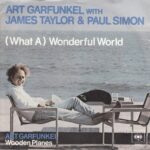 In 1978, Art Garfunkel recorded the song at a slow tempo, with Paul Simon and James Taylor alternating as lead and backing vocalists. This reached number 17 on the US Billboard Hot 100 and number 15 on the Cash Box Top 100. The Garfunkel version also became a number-one US Adult Contemporary hit for five weeks. Despite Paul Simon’s presence on the recording, the song was not credited as a Simon and Garfunkel single. Instead, labels for US copies of the Columbia Records single read, “Art Garfunkel with James Taylor & Paul Simon”.
The song (as credited under the alternate title, “(What A) Wonderful World“) was included on later versions of Garfunkel’s solo album, Watermark. It was added in place of another song (“Fingerpaint”) to capitalize on the single’s success.

Watermark is the third solo studio album by Art Garfunkel, originally released in October 1977 on Columbia Records. The first single, “Crying in My Sleep”, failed to chart, but the follow-up, a version of “(What a) Wonderful World” (featuring harmony vocals from Garfunkel’s old partner Paul Simon and mutual friend James Taylor) reached #17 on […]