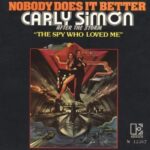 “Nobody Does It Better” is a power ballad and the theme song for the James Bond film The Spy Who Loved Me (1977). Composed by Marvin Hamlisch with lyrics by Carole Bayer Sager, the song was produced by Richard Perry and performed by Carly Simon. It was the first Bond theme song to be titled differently from the name of the film since Dr. No (1962), although the phrase “the spy who loved me” is included in the lyrics. The song was released as a single from the film’s soundtrack album, and became a major worldwide hit.

Among the most successful Bond themes, the song spent three weeks at No. 2 on the US Billboard Hot 100, but was kept out of the top spot by Debby Boone’s “You Light Up My Life”. It hit No. 1 on the Billboard Easy Listening chart, where it stayed for seven weeks, becoming the No. 1 Adult Contemporary hit of 1977. The song was certified Gold by the RIAA, signifying sales of one million copies in the US. It also reached No. 7 on the UK Singles Chart, and was certified Silver by the BPI. The song received Academy Award and Golden Globe Award nominations for Best Original Song in 1978, losing both to “You Light Up My Life” from the 1977 film of the same title. At the 20th Annual Grammy Awards held in 1978, “Nobody Does It Better” received a nomination for Song of the Year, and Simon was nominated for Best Pop Vocal Performance, Female.