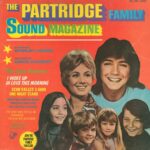 The Partridge Family Sound Magazine is the third studio album by TV-linked pop project The Partridge Family. Released in August 1971 ahead of the start of the second season of the US TV series, it was their third hit album in ten months. In late September 1971, in its fifth week on Billboard’s Top LP’s chart, the album reached its no. 9 chart peak. In that same week the album’s one hit single release, “I Woke Up In Love This Morning”, peaked at no. 13 on Billboard’s Hot 100. The LP was certified gold that same month. Sound Magazine is near-universally regarded – by both fans and critics – as the Partridge Family’s consummate pop album.

Sound Magazine was the only Partridge Family album to crack the UK Top 20. It peaked at no. 14 in April 1972, coinciding with the chart climb of David Cassidy’s smash double A-sided UK solo debut hit “Could It Be Forever”/”Cherish” (UK no. 2). The album dropped out of the UK Top 40 in the same late May 1972 week in which both the afore-mentioned single and its parent album Cherish peaked at no. 2 in their respective charts.

On Billboard’s Top LP’s chart, Sound Magazine overlapped with the 6 November 1971 – 22 January 1972 Hot 100 chart run of Cassidy’s US debut solo hit “Cherish” (US no. 9). The album remained in the Top 30 throughout the single’s chart run, then slipped following the single’s disappearance from the Hot 100.

Consistent with all of the Partridges’ eight studio albums, the record was produced by Wes Farrell for Coral Rock Productions, and released on Bell Records. Farrell arranged the rhythm tracks, and Mike Melvoin arranged the strings and horns. The disc was engineered by Bob Kovach. As with all of the group’s releases, the album features some of the era’s most highly regarded studio musicians, better known as “the Wrecking Crew”: Hal Blaine (drums), Mike Melvoin (piano), Larry Knechtel (piano), Dennis Budimir (guitar), Louie Shelton (guitar) and Max Bennett (bass). And once again members of the Ron Hicklin Singers – brothers John and Tom Bahler, Ron Hicklin and Jackie Ward – feature prominently as backing vocalists throughout the album, with arrangements by John Bahler.

As with most Partridge Family releases, many well-known songwriters contributed songs to the album, including Paul Anka, Rupert Holmes, Tony Romeo and Bobby Hart. The latter had also contributed songs to The Monkees, a similar project which also combined a prime-time television series about a part-fictional/part-real musical group with a series of music albums.

Wes Farrell co-wrote five of the album’s songs including the final track, “Love Is All That I Ever Needed”, written with lead vocalist David Cassidy. This was Cassidy’s second composition to feature on a Partridge Family album.

In the mythos of Partridge Family lore, they also recorded a watered-down version of the relatively racy “I’ll Be Your Magician”, penned by Irwin Levine and L. Russell Brown. The track was ultimately discarded and never released, although Danny Bonaduce, who played Danny in the TV series, recorded the song for his 1973 solo album.

The cover of the album was the first to feature child actor Brian Forster, who had replaced Jeremy Gelbwaks as Chris Partridge in the TV series.