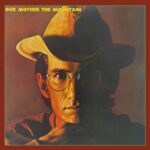 The basic tracks for Our Mother The Mountain were recorded in Los Angeles with overdubs recorded in Nashville. The album was produced by Jack Clement and Jim Malloy, who produced Van Zandt’s first album For the Sake of The Song, and Kevin Eggers, who ran Poppy Records and also managed Van Zandt. Several big name musicians played on the album, including James Burton (famed for playing behind Ricky Nelson and Elvis Presley) and renowned session player Charlie McCoy. “Tecumseh Valley”, which had appeared on the singer’s debut album, was re-recorded for Our Mother the Mountain as a result of Van Zandt’s dissatisfaction with the garish production employed on For the Sake of the Song. Although the tracks on Our Mother The Mountain were sweetened in Nashville, there was a somewhat simpler, light-handed approach taken production-wise on his follow-up LP.