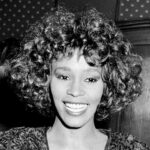 Whitney Elizabeth Houston (August 9, 1963 – February 11, 2012) was an American singer and actress. Nicknamed “The Voice”, she is one of the bestselling music artists of all time, with sales of over 200 million records worldwide. Houston has influenced many singers in popular music, and is known for her powerful, soulful vocals and vocal improvization skills.She is the only artist to have had seven consecutive number-one singles on the Billboard Hot 100, from “Saving All My Love for You” in 1985 to “Where Do Broken Hearts Go” in 1988. Houston enhanced her popularity upon entering the movie industry. Her recordings and films have generated both great success and controversy. She has received numerous accolades throughout her career and posthumously, including two Emmy Awards, six Grammy Awards, 16 Billboard Music Awards, and 28 Guinness World Records, as well as induction into the Grammy, Rhythm and Blues Music, and Rock and Roll halls of fame.

Houston began singing in church as a child and became a background vocalist while in high school. She was one of the first black women to appear on the cover of Seventeen after becoming a teen model in 1981. With the guidance of Arista Records chairman Clive Davis, Houston signed to the label at age 19. Her first two studio albums, Whitney Houston (1985) and Whitney (1987), both peaked at number one on the Billboard 200 and are among the best-selling albums of all time. Houston’s third studio album, I’m Your Baby Tonight (1990), yielded two Billboard Hot 100 number-one singles: “I’m Your Baby Tonight” and “All the Man That I Need”.

Houston made her acting debut with the romantic thriller film The Bodyguard (1992), which became the tenth highest-grossing film to that date despite receiving poor reviews for its screenplay and lead performances. She recorded six songs for the film’s soundtrack, including “I Will Always Love You” which won the Grammy Award for Record of the Year and became the best-selling physical single by a woman in music history. The soundtrack for The Bodyguard won the Grammy Award for Album of the Year and remains the bestselling soundtrack album of all time. Houston went on to star and record soundtracks for Waiting to Exhale (1995) and The Preacher’s Wife (1996). Houston produced the latter’s soundtrack, which became the bestselling gospel album of all time. As a film producer, she produced multicultural movies including Cinderella (1997) and series including The Princess Diaries and The Cheetah Girls.

Houston’s first studio album in eight years, My Love Is Your Love (1998), sold millions and spawned several hit singles, including “Heartbreak Hotel”, “It’s Not Right but It’s Okay” and “My Love Is Your Love”. Following the success, she renewed her contract with Arista for $100 million, one of the biggest recording deals of all time. However, her personal problems began overshadowing her career. Her 2002 studio album, Just Whitney, received mixed reviews. Her drug use and a tumultuous marriage to singer Bobby Brown received widespread media coverage. After a six-year break from recording, Houston returned to the top of the Billboard 200 chart with her final studio album, I Look to You (2009).  (more)