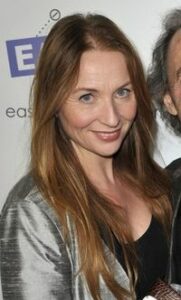 Judith Owen (born 2 January 1969) is a Welsh singer-songwriter. Her first North American album, Emotions on a Postcard, was released in 1996 and has been followed by several additional albums. She is co-founder of Twanky Records with her husband, Harry Shearer.

Owen is the daughter of Welsh opera singer Handel Owen and is originally from Llanelli. She performed on West Virginia Public Radio’s Mountain Stage on 10 September 2006 and was interviewed on National Public Radio’s (NPR) Weekend Edition Sunday on 17 June 2007, on which she performed several of her songs from her 2007 release Happy This Way. Her cover of Deep Purple’s “Smoke on the Water” has been used as bumper music on Coast to Coast AM.

In 2008 she released Mopping Up Karma, followed by 2010’s The Beautiful Damage Collection (a compilation album).

On 18 September 2008, a three-song live video performance premiered on LiveDaily Sessions, featuring the songs: “Creatures”, “I Promise You” and “Let’s Hear It For Love”. On 25 October 2008, Owen performed “Creatures of Habit” on Public Radio International’s What d’Ya Know with Michael Feldman.

She has recorded and toured with Richard Thompson in recent years, notably on the 1000 Years of Popular Music recording and tour. She has also appeared on his albums The Old Kit Bag and Sweet Warrior.

Owen appeared as herself on The Simpsons in the thirteenth-season episode “The Blunder Years” and sang the song “600” for the show’s 600th episode, “Treehouse of Horror XXVII”.

On 10 February 2011 she appeared on BBC Breakfast alongside Ruby Wax, promoting their new show, Losing It.

Her tenth studio album, Ebb & Flow was released on 7 April (UK) and 6 May 2014 (US and Canada); it features Leland Sklar on bass and Russell Kunkel on drums – both former members of The Section – and Waddy Wachtel on guitar. Ebb & Flow was her first album to be released and promoted throughout Europe and received critical acclaim from The Independent (UK), The Sunday Times, Le Figaro (France), La Repubblica (Italy), CronacaTorino.it (Italy), BT (Denmark), and Rolling Stone (Germany) with radio play from RTE Radio 1 (Ireland), BBC Radio 2, RTVE Radio 3 (Spain), P5 (Denmark) and YLE Radio Suomi (Finland).

In 2015 she was invited to support Bryan Ferry on his UK tour. The London Royal Albert Hall Show on 1 June was cancelled at the last minute due to Ferry having a throat infection. Several journalists were attending to review her and an impromptu decision was made to invite them all to her London home, where she performed the planned set acoustically. The Independent ran an article the following day and highlighted it on a feature of living-room shows. She performed at the Cropredy Festival in Oxfordshire and the MadGarden Festival in Madrid.

In 2016 Owen released the album Somebody’s Child in the UK, Europe, Australia and Japan. In June 2016, she showcased the album in Melbourne and Sydney to rave reviews including Noise11.com. The same year, Owen and Harry Shearer performed together in Brisbane and at the Adelaide Cabaret Festival with a new show called This Infernal Racket, which created massive media coverage of this as well as her album.

The 2016 annual charity show Christmas Without Tears returned to London along with New York, Chicago, Los Angeles and New Orleans.

In 2017, Somebody’s Child was released in the US and Canada, while touring throughout the year.