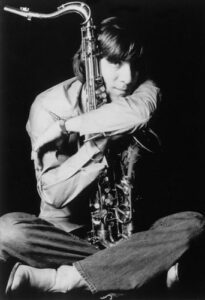 He was born in Chicago, Illinois, United States, and began playing guitar at the age of five and alto saxophone at the age of 11. His other early interests included graphics and visual art, writing, dance, puppetry, painting, sculpting, and poetry. He studied at the Art Institute of Chicago and began touring with midwestern “ghost big bands” (Les Elgart, Woody Herman) as well as playing with small local jazz and rock groups. After switching to tenor saxophone in high school, Klemmer played with commercial small groups and big bands in Chicago while leading his own groups and touring. (more)