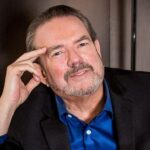 Jimmy Layne Webb (born August 15, 1946) is an American songwriter, composer, and singer. He has written numerous platinum-selling songs, including “Up, Up and Away”, “By the Time I Get to Phoenix”, “MacArthur Park”, “Wichita Lineman”, “Worst That Could Happen”, “Galveston” and “All I Know”. He had successful collaborations with Glen Campbell, Michael Feinstein, Linda Ronstadt, the 5th Dimension, the Supremes, Art Garfunkel and Richard Harris.