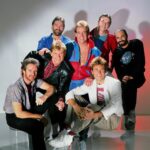 Chicago is an American rock band formed in Chicago, Illinois, in 1967. The group called themselves the Chicago Transit Authority in 1968, then shortened the name in 1969. Self-described as “rock and roll band with horns”, Chicago’s songs often combine elements of classical music, jazz, R&B, and pop music.

Growing out of several bands from the area in the late 1960s, the line-up consisted of Peter Cetera on bass, Terry Kath on guitar, Robert Lamm on keyboards, Lee Loughnane on trumpet, James Pankow on trombone, Walter Parazaider on woodwinds, and Danny Seraphine on drums. Cetera, Kath, and Lamm shared lead vocal duties. Laudir de Oliveira joined the band as a percussionist and second drummer in 1974. Kath died in 1978, and was replaced by several guitarists in succession. Bill Champlin joined in 1981, providing vocals, keyboards, and rhythm guitar. Cetera left the band in 1985 and was replaced by Jason Scheff. Seraphine left in 1990, and was replaced by Tris Imboden. Although the band’s lineup has been more fluid since 2009, Lamm, Loughnane, and Pankow have remained constant members. Parazaider retired in 2017, but is still a band member.

In September 2008, Billboard ranked Chicago at number thirteen in a list of the top 100 artists of all time for Hot 100 singles chart success, and ranked them at number fifteen on the same list produced in October 2015. Billboard also ranked Chicago ninth on the list of the 100 greatest artists of all time in terms of Billboard 200 album chart success in October 2015. Chicago is one of the longest-running and most successful rock groups, and one of the world’s best-selling groups of all time, having sold more than 100 million records. In 1971, Chicago was the first rock act to sell out Carnegie Hall for a week.

To date, Chicago has sold over 40 million units in the U.S., with 23 gold, 18 platinum, and eight multi-platinum albums. They have had five consecutive number-one albums on the Billboard 200 and 20 top-ten singles on the Billboard Hot 100. In 1974 the group had seven albums, its entire catalog at the time, on the Billboard 200 simultaneously. The group has received ten Grammy Award nominations, winning one for the song, “If You Leave Me Now”. The group’s first album, Chicago Transit Authority, released in 1969, was inducted into the Grammy Hall of Fame in 2014. The original line-up of Chicago was inducted into the Rock and Roll Hall of Fame in 2016. In 2017, Peter Cetera, Robert Lamm, and James Pankow were elected to the Songwriters Hall of Fame for their songwriting efforts as members of the music group. Chicago received a Grammy Lifetime Achievement Award on October 16, 2020. (more)