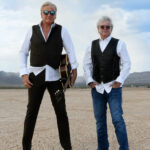 Air Supply are an Australian soft rock duo, consisting of English-born co-lead vocalist and guitarist Graham Russell and Australian co-lead vocalist Russell Hitchcock formed in 1975. They had a succession of hits worldwide, including eight top-five hits in the United States, “Lost in Love” (1979), “All Out of Love”, “Every Woman in the World” (both 1980), “The One That You Love” (number one), “Here I Am” (both 1981), “Sweet Dreams”, “Even the Nights Are Better” (both 1982) and “Making Love Out of Nothing at All” (1983). In Australia they had four top ten placements with “Love and Other Bruises” (1976), “All Out of Love”, “Every Woman in the World” and “The One That You Love”. Their highest charting studio album, The One That You Love (1981) reached number ten in both Australia and the US. The line-up has included numerous band members and they relocated to Los Angeles in the late 1970s. The Australian Recording Industry Association (ARIA) inducted Air Supply into their Hall of Fame on 1 December 2013, at the annual ARIA Awards. (more)

1977 Air Supply – Love And Other Bruises