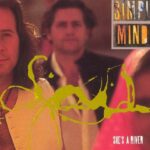 “She’s A River” is the first single released from Scottish rock band Simple Minds‘ 11th studio album, Good News from the Next World. Written by band members Charlie Burchill and Jim Kerr, the song was inspired by Herman Hesse’s novel Siddhartha, a book about self-discovery. Released on 16 January 1995, “She’s a River” reached number three in Canada and Italy, number seven in the Flanders region of Belgium, and number nine on the UK Singles Chart. In the United States, it peaked at number six on the Billboard Album Rock Tracks chart.

“She’s A River” was the first single released by the band featuring Vinnie Colaiuta on drums. Kerr called his performance “brilliant” and one-of-a-kind.

Good News From The Next World is the tenth studio album by Scottish rock band Simple Minds, released in January 1995 by record label Virgin. The album’s recording started in the band’s own studio in Perthshire, Scotland, in 1993, and finished in Los Angeles, US, in summer 1994. The two original band members – singer […]

END_OF_DOCUMENT_TOKEN_TO_BE_REPLACED

Barbra Streisand 1995 Simple Minds – Good News From The Next World