1995 Simple Minds – Good News From The Next World 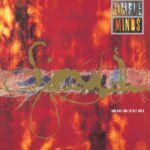 Good News From The Next World is the tenth studio album by Scottish rock band Simple Minds, released in January 1995 by record label Virgin.

The album’s recording started in the band’s own studio in Perthshire, Scotland, in 1993, and finished in Los Angeles, US, in summer 1994. The two original band members – singer Jim Kerr and guitarist Charlie Burchill – wrote all nine tracks on the album. They were joined by a number of guest musicians for recording sessions. Keith Forsey, who had previously worked with Simple Minds on their breakout single “Don’t You (Forget About Me)”, shares producing credits with the band.

In some markets the album performed somewhat better than their previous record, Real Life, but it quickly faded from public attention, producing only two moderately successful hit singles.