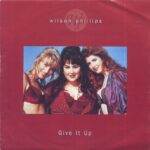 “Give It Up” is the second single from Wilson Phillips‘ second studio album, Shadows and Light. The single peaked at number 30 on Billboard Hot 100 in September, 1992, eventually becoming the band’s last top-40 single.

Shadows and Light is the second album by Wilson Phillips, released in 1992. Following their best-selling debut album Wilson Phillips, the trio enlisted the production again of Glen Ballard, who had also produced their debut. The album’s songs had a big contrast with the ones on their debut. While the majority of the songs on […]