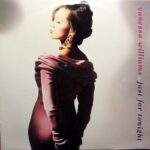 “Just For Tonight” is the fourth single from Vanessa Williams‘ second studio album, The Comfort Zone (1991). The song was slightly remixed for the single and reached No. 2 on the US Adult Contemporary Charts. The single’s B-side is “Whatever Happens”, a song from her 1988 debut album The Right Stuff, while the CD single contains the previously unreleased song “Love Like This”, which was later also to be included on the compilation album Love Songs (2004). The song tells about a woman who wants to share one more night with her lover before their relationship ends.

The Comfort Zone is the second studio album by American singer and actress Vanessa Williams, released on August 20, 1991, by Mercury’s Wing Records Label. The first single from the album was “Running Back to You”, an uptempo song that peaked at number one on the Billboard Hot R&B/Hip-Hop Songs chart and number 18 on […]