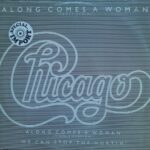 “Along Comes A Woman” is a song written by Peter Cetera and Mark Goldenberg for the group Chicago and recorded for their album Chicago 17 (1984), with Cetera singing lead vocals. The fourth single released from that album, it is the last Chicago single released with original singer/bassist Cetera, who left the band in the summer of 1985.

Upon its release in 1985, Billboard magazine highlighted the single in its “Singles: Pop: Picks” section, as a “new release with the greatest chart potential,” and called it a “hard rocker.” At the end of the year, Billboard magazine music critic, Linda Moleski, listed the single among her top ten highlights of the year as, “An excellent funk-pop sound that’s reflective of 1985.