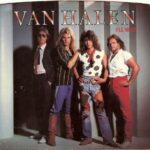 It was the second single released from the record and reached number 13 on the Billboard Hot 100. Despite the song being a hit, no video was ever filmed for it.

The song was written as a collaboration between Van Halen and Doobie Brothers singer Michael McDonald, who was brought in by Templeman when David Lee Roth had trouble completing the melody and lyrics to the song. The song is in the key of D minor, having a moderate common time tempo of 114 beats per minute.

The song’s subject was inspired by a woman wearing men’s underwear in a Calvin Klein print media advertisement. Roth pinned up the ad beside his Sony Trinitron television and addressed the lyrics to the model.

The single’s original cover featured the band posing in the same location where the cover for the “Hot for Teacher” single had been shot.

David Lee Roth and producer Ted Templeman wanted to remove the song from the album, while Eddie Van Halen and engineer Donn Landee pushed for its inclusion.

1984 is the sixth studio album by American rock band Van Halen, released on January 9, 1984. It was the last Van Halen studio album until A Different Kind of Truth (2012) to feature lead singer David Lee Roth, who left the band in 1985 following creative differences. This is the final full-length album to […]