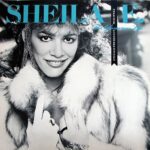 “The Glamorous Life” is a song written by Prince, recorded by American percussionist Sheila E. and produced by both. The song has lyrics which reflect a cynicism for the decadence and materialism of the song’s protagonist, referred to in the third person, who “wants to lead a glamorous life”, although she is aware that “without love, it ain’t much”.

“The Glamorous Life” is the title track and closing song on Sheila E.’s debut solo album, and reached number seven on the U.S. Billboard Hot 100 chart, as well as number one on the Billboard Hot Dance Music/Club Play chart. The track earned two Grammy Award nominations and three MTV Award nominations. In 2019, the original Prince demo of the song was released on his posthumous album Originals.

The Glamorous Life is the first album by the singer/drummer/percussionist Sheila E., released on June 5, 1984. The title track, “The Glamorous Life”, entered the US top ten, and her second single, “The Belle of St. Mark” charted in the US, UK, Ireland, Netherlands and New Zealand.