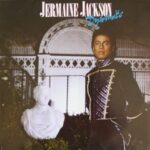 Jermaine Jackson (released internationally as Dynamite) is the tenth studio album by United States singer-songwriter Jermaine Jackson, released in 1984. It was his debut album with Arista after leaving Motown. The album features Whitney Houston and his brothers Michael, Tito and Randy.

Overall, it stands as one of Jermaine Jackson’s most commercially successful albums, selling over 900,000 copies in the US to date and being certified Gold by the Recording Industry Association of America (RIAA). Jermaine Jackson was Jackson’s first of numerous albums released with Arista Records, after leaving Motown, who he had been with for thirteen years. The album was released internationally under the title Dynamite. The album went on to be Jermaine’s second-most successful album in the United States, peaking at No. 19 – 13 places below Let’s Get Serious — on the main Billboard album chart, but becoming the #1 R&B album on July 7, 1984.

The disc achieved Gold status, eventually surpassing 900,000 in US sales. Internationally, it was Jackson’s most successful album, peaking within the charts of four non-US territories. “When the Rain Begins to Fall”, originally recorded for the soundtrack of Voyage of the Rock Aliens, was later included on the album after its success as a single.

The album track “Take Good Care of My Heart,” a duet with the then relatively unknown American R&B and pop singer Whitney Houston, was also the B-Side of the released “Dynamite” single. The song later appeared on Houston’s self-titled debut album, released February 14, 1985 on Arista Records.

4 Escape From The Planet Of The Ant Men

7 Take Good Care Of My Heart

8 Some Things Are Private