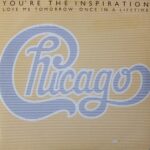 “You’re The Inspiration” is a song written by Peter Cetera and David Foster for the group Chicago and recorded for their fourteenth studio album Chicago 17 (1984), with Cetera singing lead vocals. The third single released from that album, it reached No. 3 on the US Billboard Hot 100 chart in January 1985 and also climbed to the top position on the Adult Contemporary chart at the same time. The song won honors for Cetera from the American Society of Composers, Authors and Publishers (ASCAP), in 1986 in the most-performed songs category.

Peter Cetera re-recorded the song for his 1997 solo album You’re the Inspiration: A Collection. That same year he also recorded a single version with the vocal R&B group Az Yet.